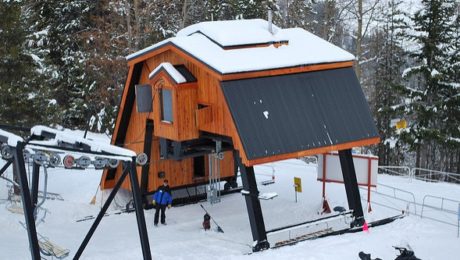 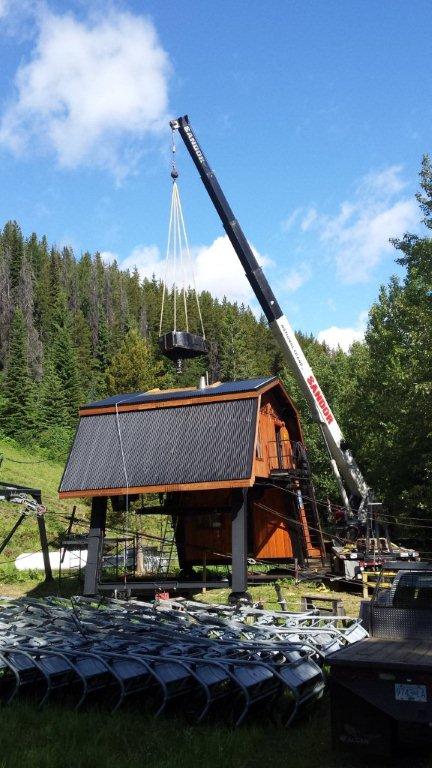 The Easter Chair is an oldie but a goodie, adding charm and character to the back side of Kimberley Alpine Resort. Like all old girls she loves care and attention, a process which started back in 2010 with a new diesel engine and transmission.  2011 brought a whole “new” set of chairs, care of retiring Nakiska’s Gold Chair to its new home in Fernie on the Polar Peak.

This year the love comes in the form of a complete service and rebuild of the gear box. Unlike a modern lift where you can pop the gear box out of the drive station by undoing a few bolts, for Easter this means taking the haul rope off, dropping the bull wheel, then craning out the gear box. Good thing we won’t need to do this for another 25 years or so! 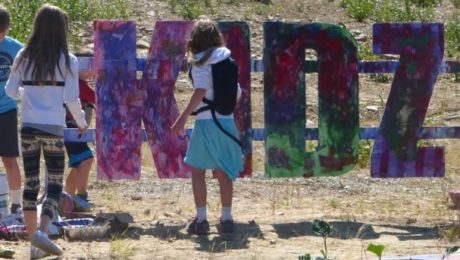 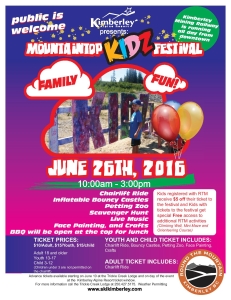 Join us for another Mountaintop Kidz Festival on June 26th, 2016! Ride the chairlift to the mountaintop to find a kids wonderland of fun including bouncy castles, scavenger hunts and live music! Plus facepainting, crafts, mountaintop BBQ and petting zoo!

Check out photos from last year’s event on the Trickle Creek Lodge Facebook page or the Facebook event for this year. 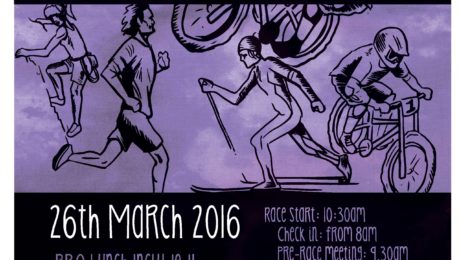 Registration fee includes a bbq lunch, event souvenir and a draw ticket for a chance to win awesome prizes!

Click here to view Schedule and Nordic Maps – 2016 iron legs schedule  5km Nordic Map  3.5km/kids Nordic
8am – Bib pick up, waiver signing and collection of payments on the day of the race. (It is recommended that individual racers drop their equipment off at the transition areas prior to registering at 8am-9:30am on Saturday. There will be a volunteer present at 8am outside the Climbing Gym and Nordic Centre to watch over equipment.)
9:30am – Pre race meeting in Slopeside
10.30am – Race starts
1:30pm: Ceremony in KAR Plaza

Here is the 2016 Course Map for the running/cycling portion of Iron Legs. Runners will start at Kimberley Nordic Club and run down to Spirit Rock Climbing Center through the Platzl. The cycling portion will start at Climbing Gym through the Platzl (mandatory for all cyclists to walk/push bike through Platzl) up Gerry Sorensen Way to Stemwinder Drive (past Trickle Creek Lodge) into the KAR Plaza. 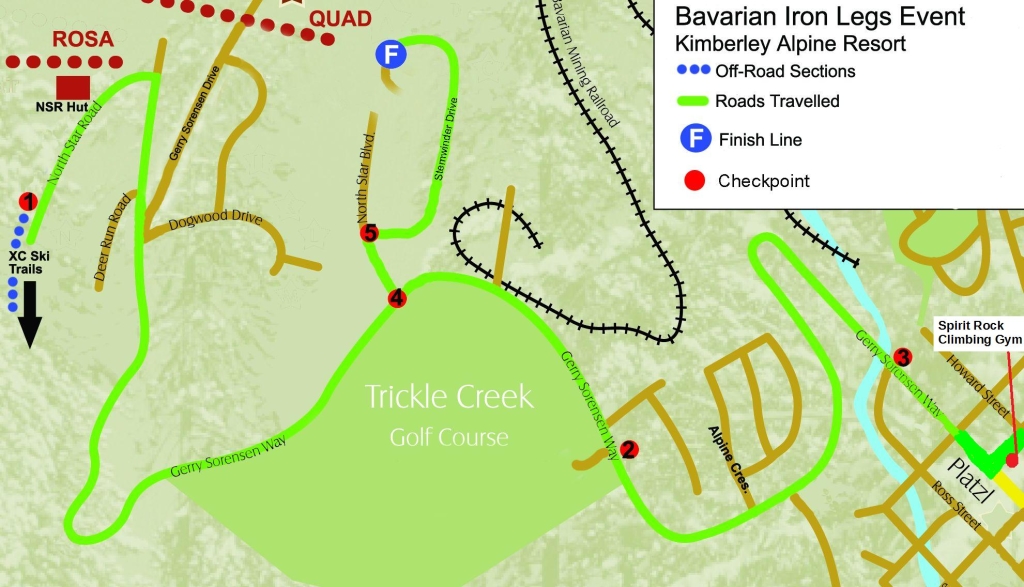 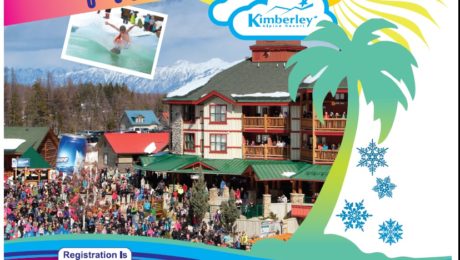 Thank you to all the participants, sponsors, organizers and volunteers for all their help to make this event a success. 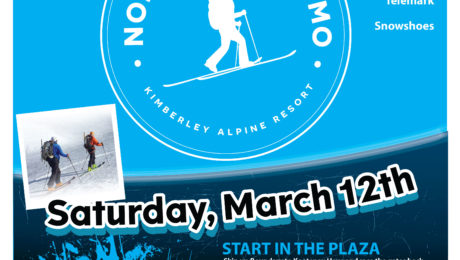 1. Competitors must descend on skis or board through the gated course to the finish at base.

2. If using snowshoes, competitors must carry their own equipment and ski or board to finish.

3. Since the awards ceremonies will be held at 3 pm in the plaza, competitors must be able to reach the first control station at the top of Boundary within 2 hours or will be disqualified. Competitors must complete the competition to qualify for prizes and draw prizes.

5. If you miss a control station on the descent you will assess a 10 second penalty.

All AT -Gear, splitboards, tele-mark and snowshoes welcome.  (Snowshoes available for $11 at the KAR rental Shop-this is a special deal only for participants) 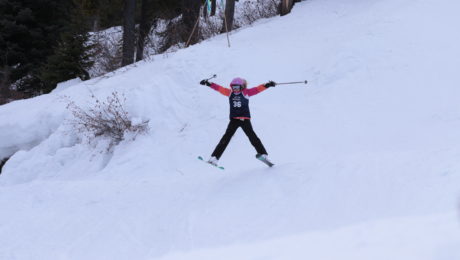 Click on the following link to view Saturday’s results:

Click on the following link to view Sunday’s startlist

Many thanks to the athletes, parents, volunteers, staff and sponsors for making this happen. 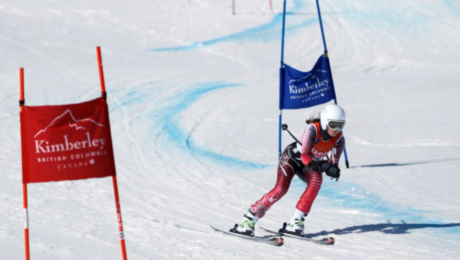 On February 16-20, Kimberley Alpine Resort in hosting the IPCAS/Masters Ski Race Series. This is a very unique combination, as we are combining the adaptive/disabled ski racers with 18-80 year old Masters Racers.

The IPCAS will be training and competing in Downhill and Super G disciplines only.  The Masters will be doing Downhill, Super G, GS and a Night Slalom. Masters is open to anyone 18 and older that has the desire to compete.

Thursday, Feb 18 –  2 Downhill Races (IPCAS and Masters)  *Masters must particpate in 1 day of Downhill Training in order to race in the Downhill* 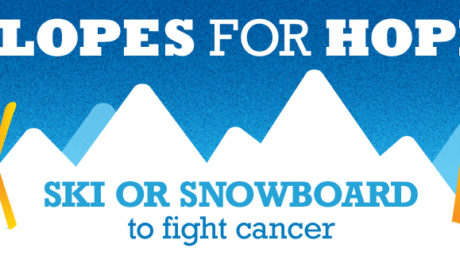 2 Everest Challenges
What Will You Conquer?

Slopes for Hope is a family-friendly winter enthusiast event designed by local residents in support of the Canadian Cancer Society.

We are inviting snowboarders, Alpine & Nordic skiers and all people who love to play in the snow to join the fight against cancer as we take it to the slopes! Participate individually or in teams of up to 4 people with your family, friends and co-workers.

You can participate in one of 2 challenges:

There will be an apres-event with entertainment and prizes awarded at the end of the day for both challenges.For more details on the event and each of the challenges, click here.

If you want to fundraise offline, click here to print a donation form. Please bring collected donations and filled out forms to the registration table with you the morning of the event.

Please note: Due to last years cancellation, we have rolled over 2015 registered participant’s registration fees into the 2016 Slopes event and any donations collected in 2015 will count towards your 2016 totals.

2015 registrants should login with your 2015 username/password – please do not re-register. 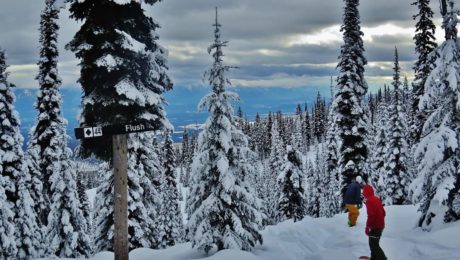 A hidden gem, that’s the phrase often used to describe Kimberley –  a ‘hidden gem’ in the Canadian Rockies.  It’s one of those ski resorts that is slightly lesser known to the world, however anyone who visits is almost guaranteed to fall in love.  Even if you are a frequent visitor to Kimberley, there’s a good chance you don’t know about those ‘hidden gems’ on the mountain – runs, certain spots and powder stashes only our staff and locals tend to know about.  Well, we think it’s about time we let the secrets out and tell everyone about our hidden powder stashes, covert runs and secluded favourite spots for all to enjoy (sorry locals).

Flush
#44 – Black
Flush is one of our staff’s favourite spots, it’s been the site for our JEEP Junior Freeski comp for the last few season as it’s got plenty of playful terrain, lots of little hits and bumps.  The first part of the run is mellow, tree skiing and often home to late stashes of that perfect purcell powder Kimberley is so known for.  Much of Kimberley’s history is owed to mining, being home to at one time, the largest producing zinc mine in Canada, therefore a lot of the runs in Kimberley lend their name to that legacy, Flush is no exception as it’s named after a mining claim.  (Plus there’s a natural half pipe at the bottom)! 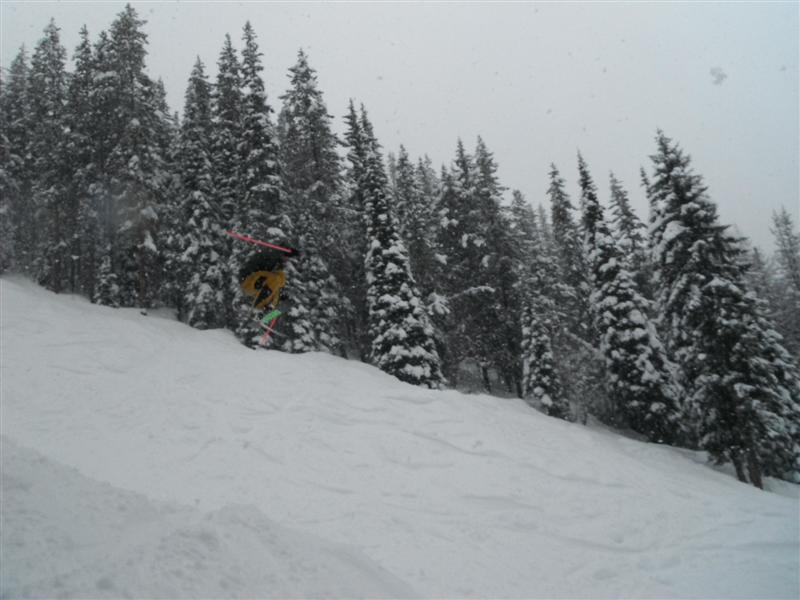 Sending it on Flush!

Dreadnaught
#4 – Blue
Also, named after a mining claim, Dreadnaught offers great variation, with wide open meandering groomers at the top to fun rolling terrain near the bottom.  The Kootenay Haus, located at the top of the run offers some of the best views of the valley and entire run.  Dreadnaught is the dedicated race run for Nancy Green and other race training and race events.
Locals Tip – The front side is THE perfect intermediate terrain, long fall-line cruisers on corduroy groomed softpack (typically).   Kimberley has the best cruisy groomers in the Kootenays hands down. 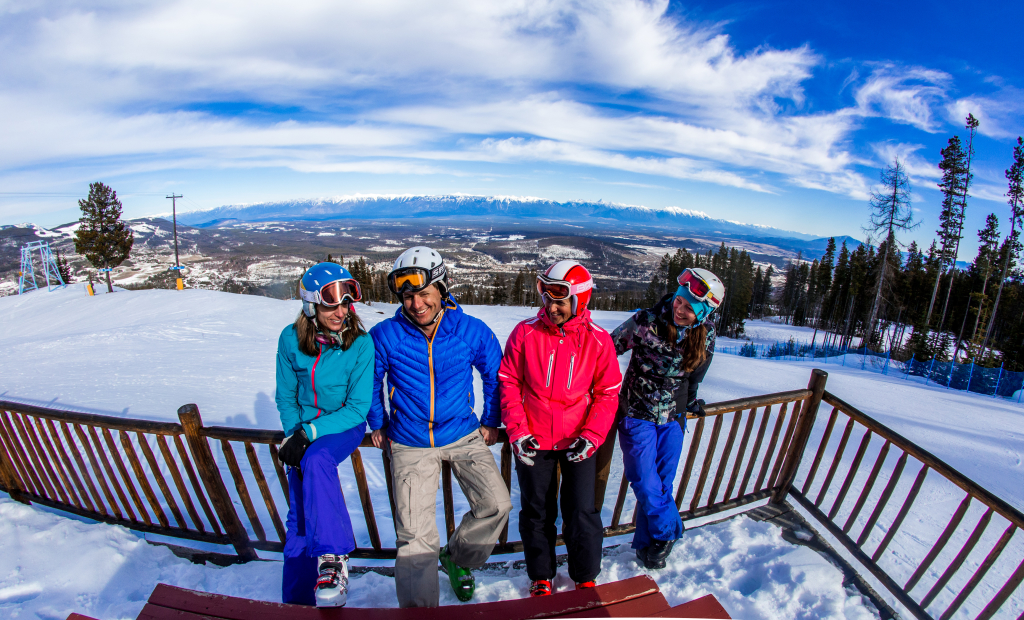 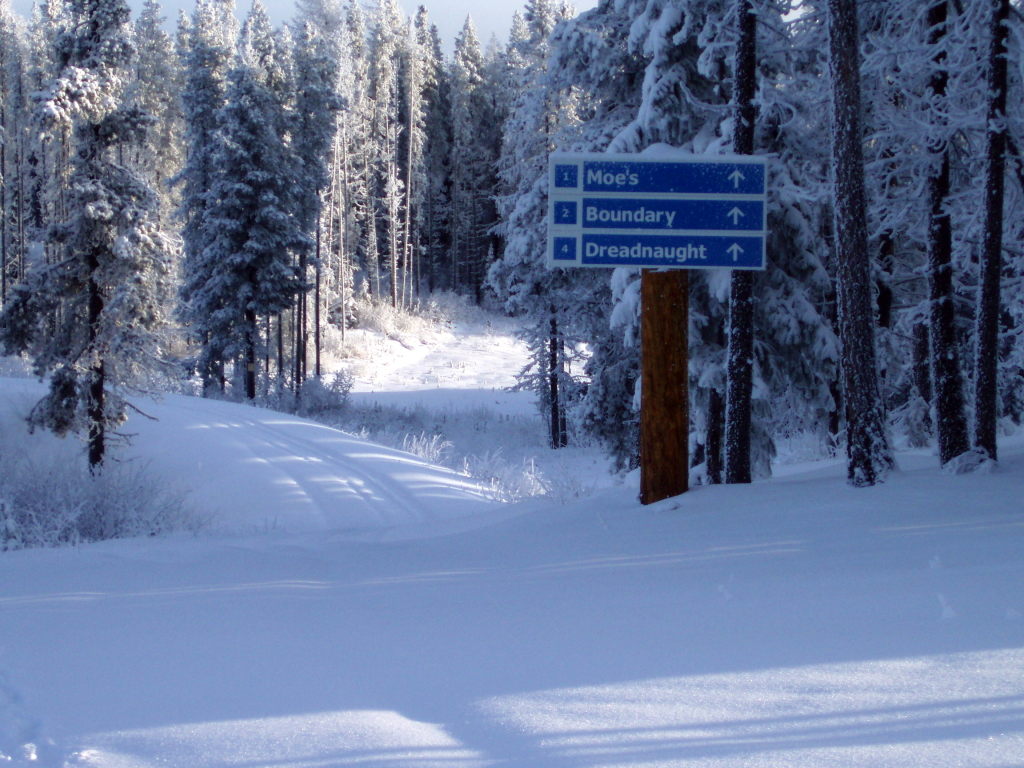 (View from the top of Kootenay Haus)

Geneva
#59 – Black
One of our locals’ favourite run is called Geneva, it’s located in the gladed area known as The Black Forest, the largest tree skiing area in North America.  Geneva is a long leg burner with very interesting and variable terrain and is always the first stop after a large overnight powder dump (and you can see why from this picture). 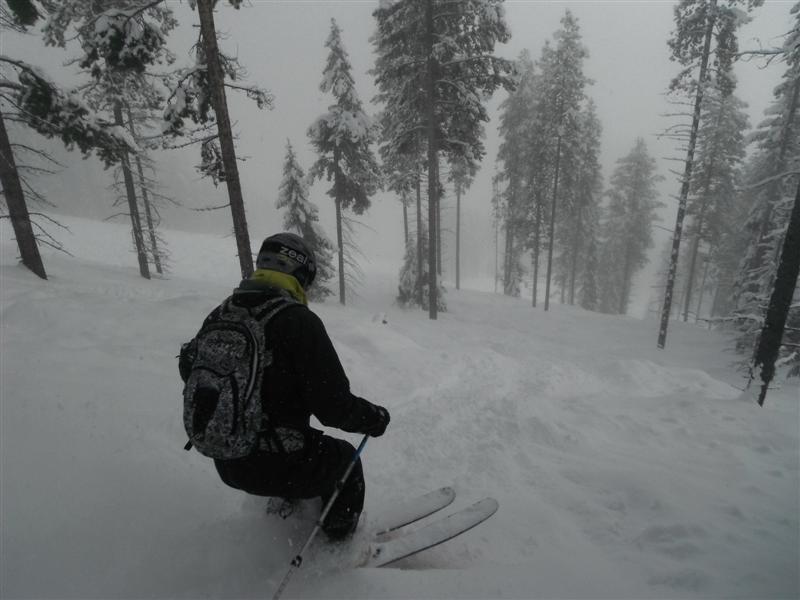 Our next undisclosed spot is also located in the Black Forest.  Another one named after a staked mining claim, Dorval is a forever favourite of our staff as most people ride right on by it!  Our theory is everyone is too busy making their way to the Easter chair to notice this spot and pass it by, but next time we suggest you try it out!  To get to Dorval, ski right of the intersection to Dean’s Right and Ridgeway, some of the best attributes of Dorval are – it’s one of the steepest runs on the hill and is only groomed once a week.  One of the rarest experiences you’ll have on this run is actually seeing another soul riding near you and if you do, there’s a safe bet they work at the resort or grew up skiing there.

Tamarack
#28 – Black
Tamarack AKA the ‘show off’ run because; top to bottom, Tamarack runs fully below the chair of the same name.  Since many people don’t like to ride right under the lift and be exposed to chairs and chairs of onlookers, there are often fresh tracks to be found here!  Tamarack’s fall link is top to bottom with a vertical rise of 1182 ft, making it a real thigh burner to ride and get that heart rate up.  Hit up Tamarack, then it’s time hit up the hot tub! 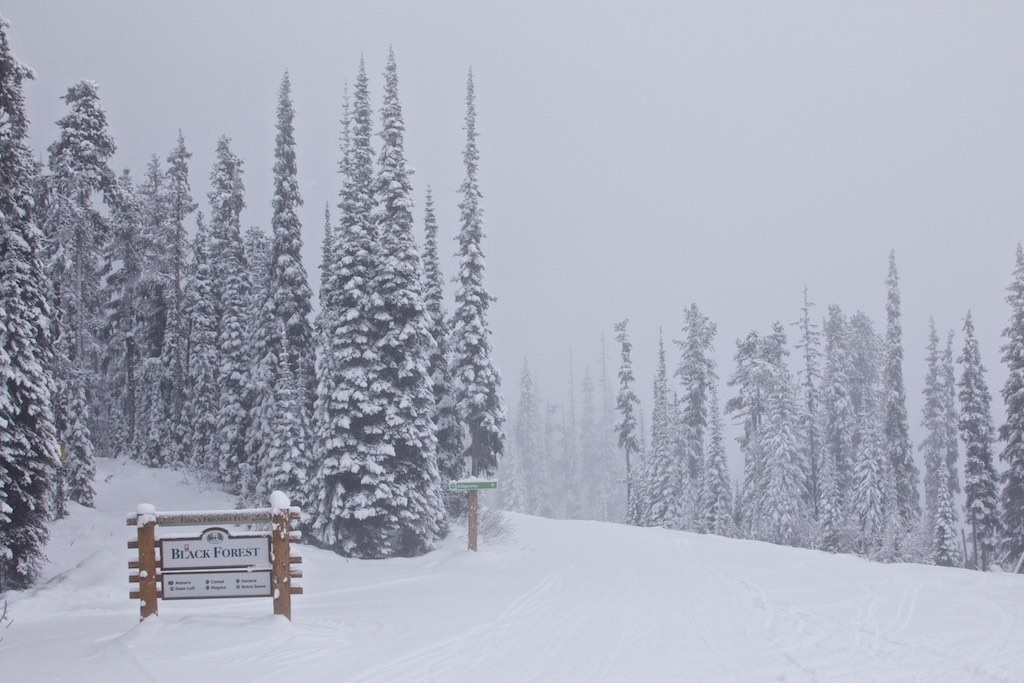 Need to look any of these spots up?  View and download our trail map online.

See you out here!