Gerry Feehan’s travel stories are syndicated through Troy Media. He lives in Red Deer, Alberta and Kimberley, BC. For more stories, photographs and video see gnfeehan.blogspot.com 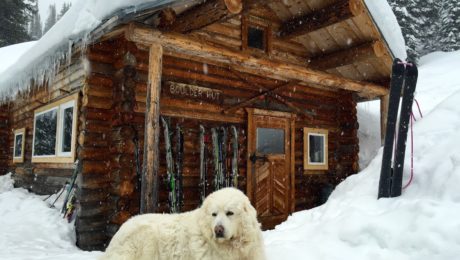 There are no baths or showers at Boulder Hut. Clean-up after a day of strenuous backcountry skiing involves soaping up in a wood-fired sauna, then dumping a bucket of water over one’s head. To my surprise a fellow guest, fit naked and female, offered to do the pouring. I reluctantly acquiesced. Thereafter, the absence of a proper shower seemed trivial and I decided to forego my complaint to management.

Management at this remote backcountry lodge consists of owners Mark and Sarah Yancey, whose infectious love of Boulder Hut – and the remote lifestyle it entails – is evident from the moment they greet you on the snow-packed heli-pad. 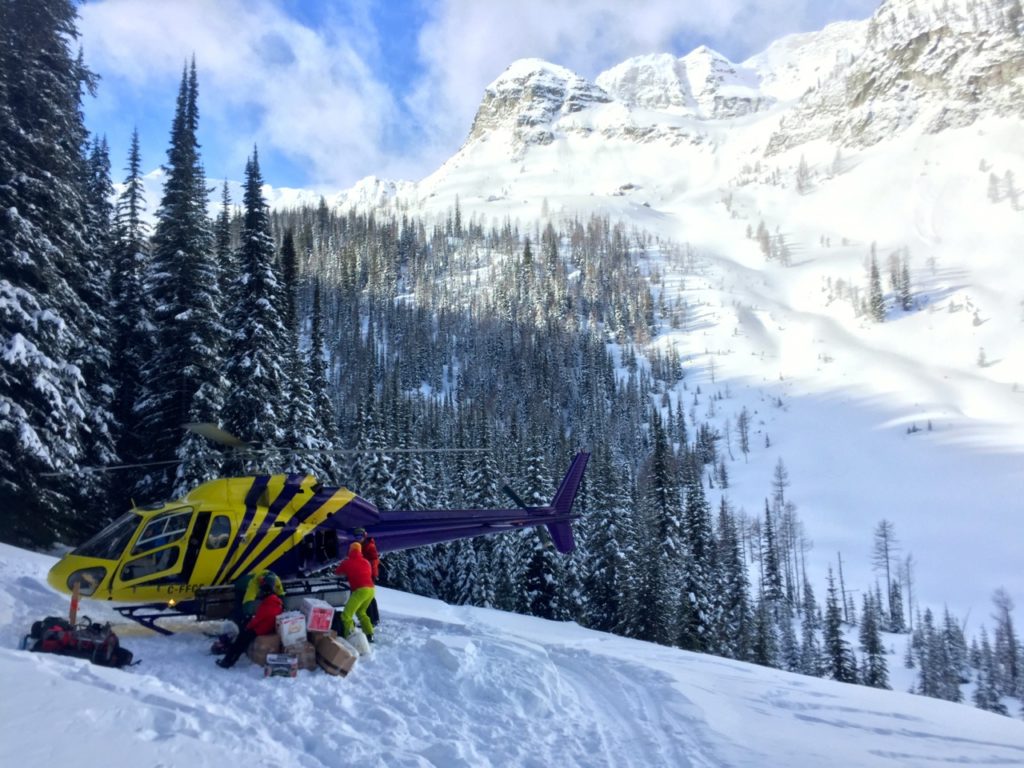 Over the years I’ve acquired all the accoutrements for ski-touring – and on occasion I’ve skinned up the Kimberley ski hill – but I had never before toured in the backcountry.

So I was curious when a helicopter touched down at the base of the ski hill on a sunny morning in January. A group of people, ski paraphernalia in tow, was preparing to board. I put down my coffee, stepped off the deck and wandered over. I asked the pilot where they were bound.

As I ain’t gettin’ no younger, I determined to be on that chopper before the season ended. And so in mid-March I was soaring over our condo, watching my wife Florence waving goodbye from our deck. I hoped it was not a permanent farewell.

Moments later we were up and over the Black Forest on the ski hill’s back side.

Then we were into the rugged roadless world of the Purcell Range. We steered along a ridge of wintry peaks, summited Boulder Pass and descended into a broad forested valley. A tiny dot far below soon resolved into the Boulder Hut. 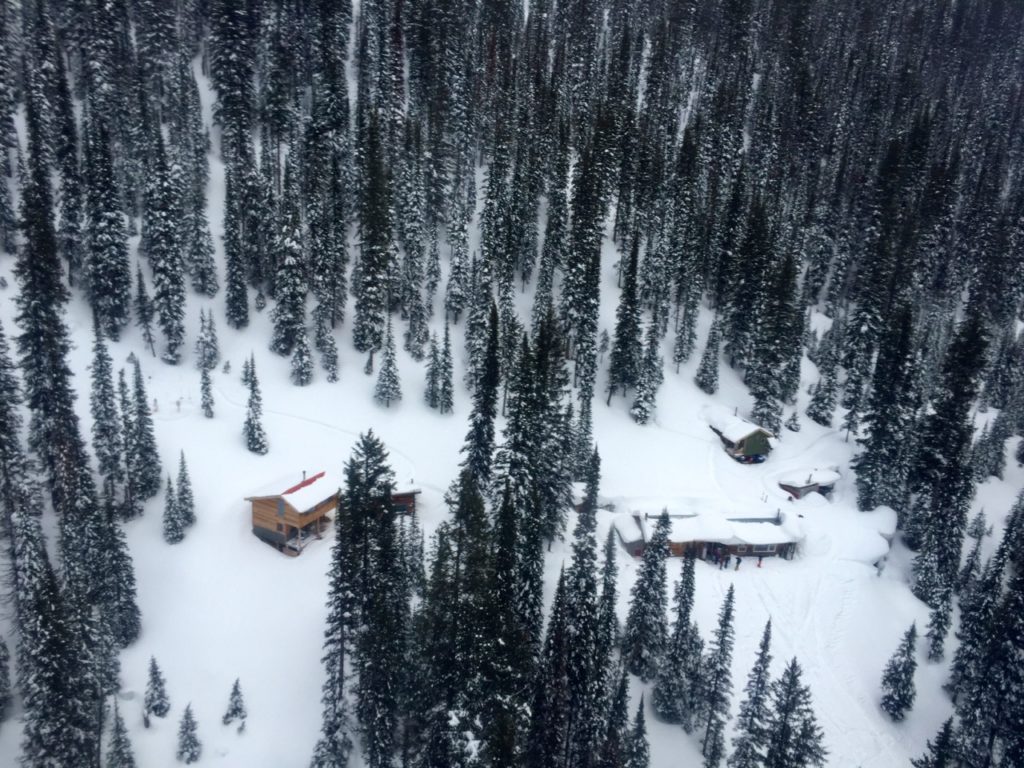 After a welcoming lunch and safety briefing we strapped on skins and started our first ascent through the thick forest of old-growth spruce that provides Boulder’s gorgeous back-drop. The conditions were fabulous; a storm had just blown through. Fresh powder and sunny, bluebird conditions greeted us. 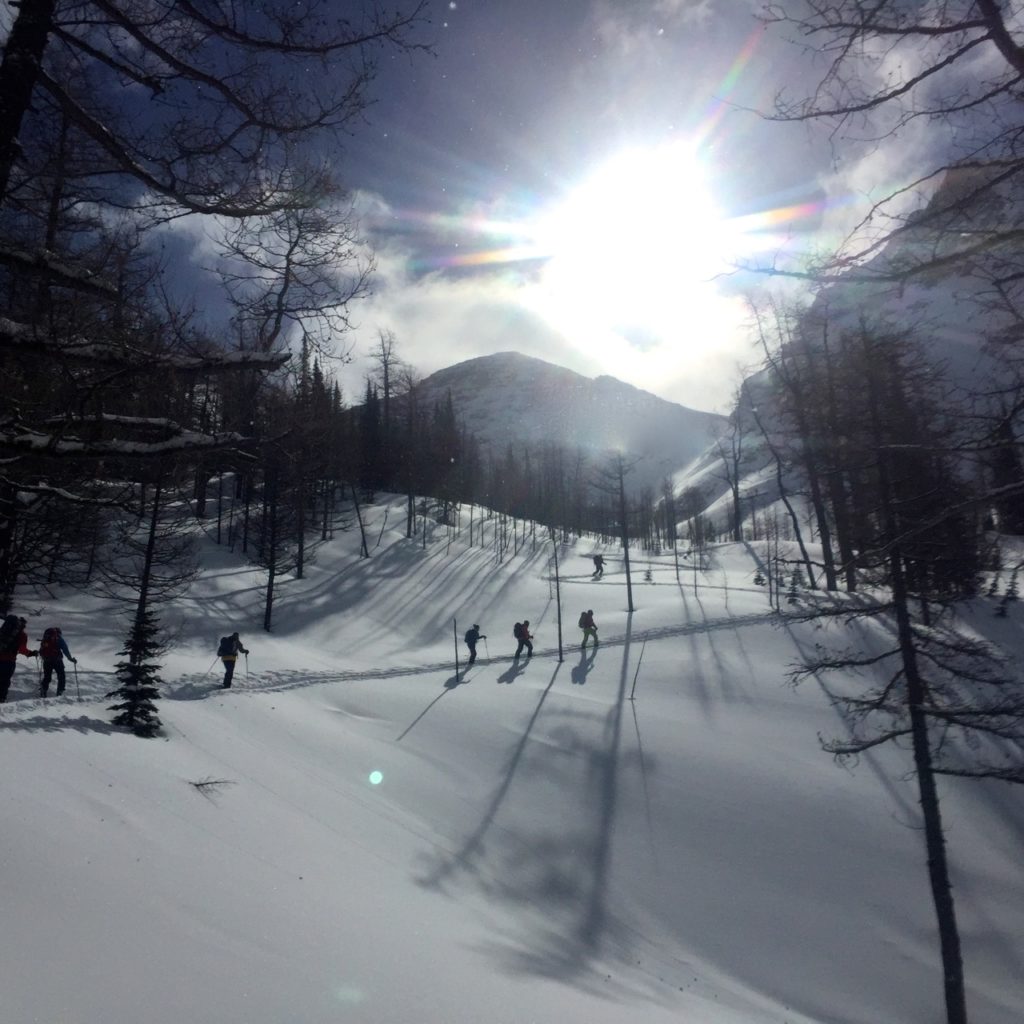 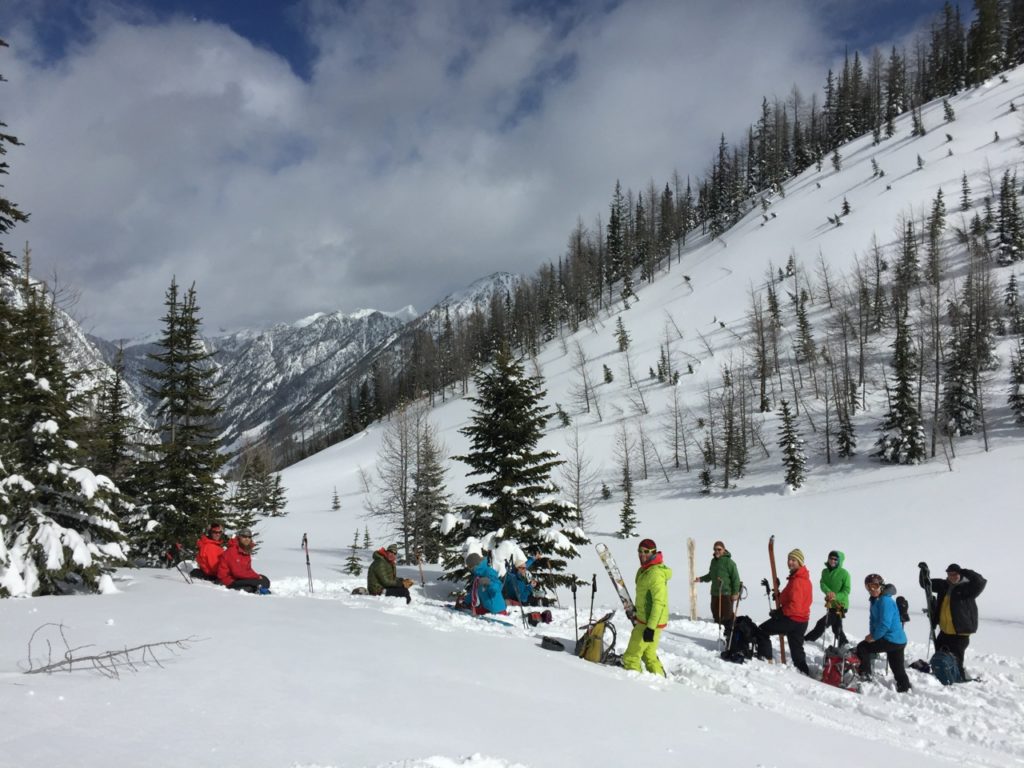 Every winter the media warns of avalanche danger in the backcountry. At Boulder Hut safety is paramount. With Mark and alpine guide Brent Peters constantly checking conditions – and leading the way through dicey areas – we felt safe and comfortable.

When there was any hint of risk they dug a snow profile to check for stability and to ensure some rogue slab wouldn’t ruin our day. 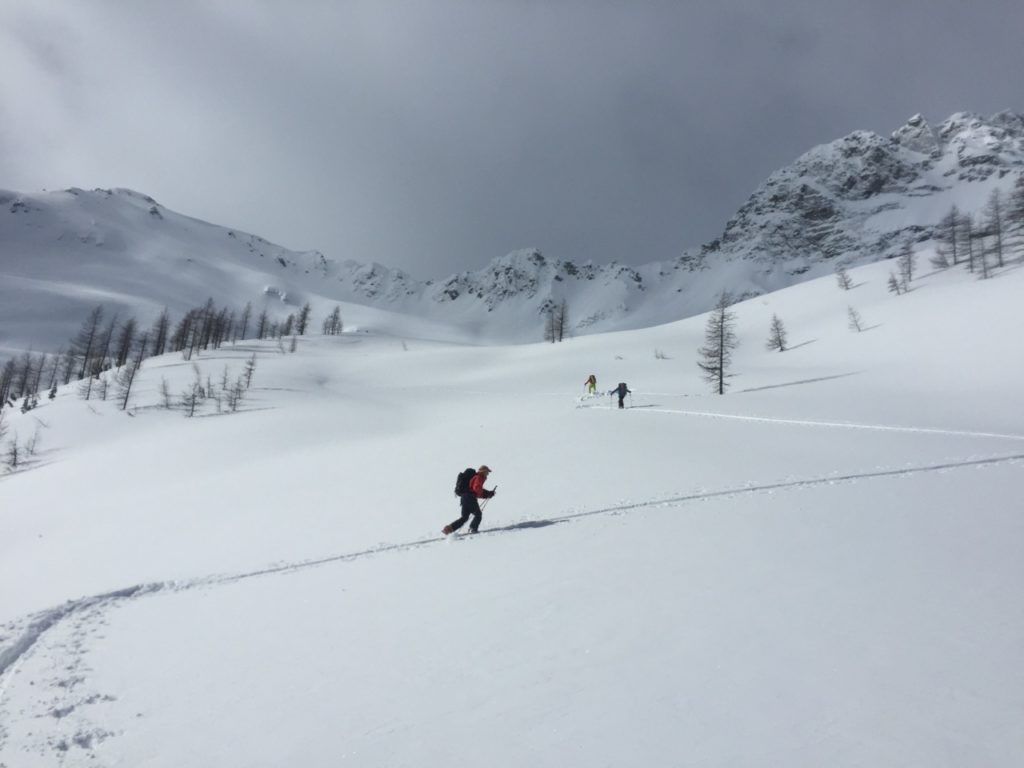 Boulder Hut is remote, quaint and rustic – guests share an open sleeping cabin. If you forget earplugs (and sleeping pills), your repose may be ruined; exhausted snoring skiers make a hell of a racket. In the evening guests are responsible for stoking the wood-burning stove. Failure to maintain the fire means for a long cold shivering night. As the only rookie, I was utterly exhausted at the end of each day and slept like a baby – with an assist from earplugs (and a little blue friend).

Boulder has no laundry facilities. By the fourth night my ski socks, hanging over the bunk to dry, had taken on a crisp flavourful bouquet – or so my fellow guests observed (I was obliviously comatose).

Drinking water is drawn directly from a small creek that flows year-round. The same stream supplies power via a small hydroelectric plant. 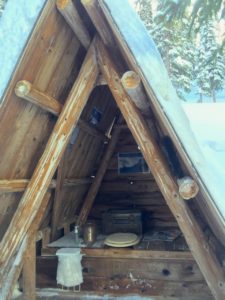 Boulder’s bathrooms are located al fresco; open A-frame jobbies where one can enjoy a panoramic view of the Purcell Mountains whilst engaging in one’s morning constitutional. A sign planted in the snow announces whether the privy is occupied or available. 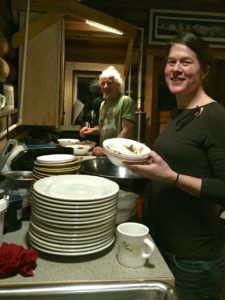 At Boulder Hut there is no cellphone coverage or internet. And guests are (gasp) expected to help with dishes after dinner.

I’ve been to five-star ski lodges where a cat whisks you to the top of the mountain for each run. At Boulder Hut every turn is earned. Mark calculated that we climbed 14,000 feet (4300 meters) during our stay.

I had the time of my life. Mark, Sarah, their kids Grace and Alden, mascot Rosie the Great Pyrenees and my seven fascinating fellow guests made for a fabulous, unique experience. 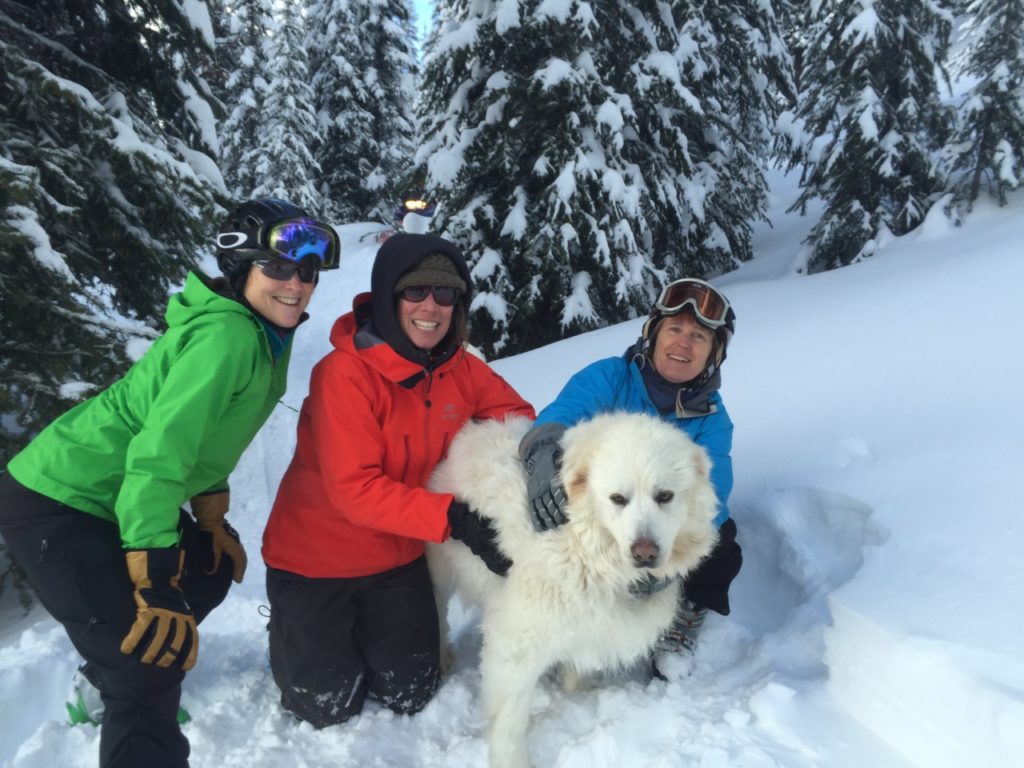 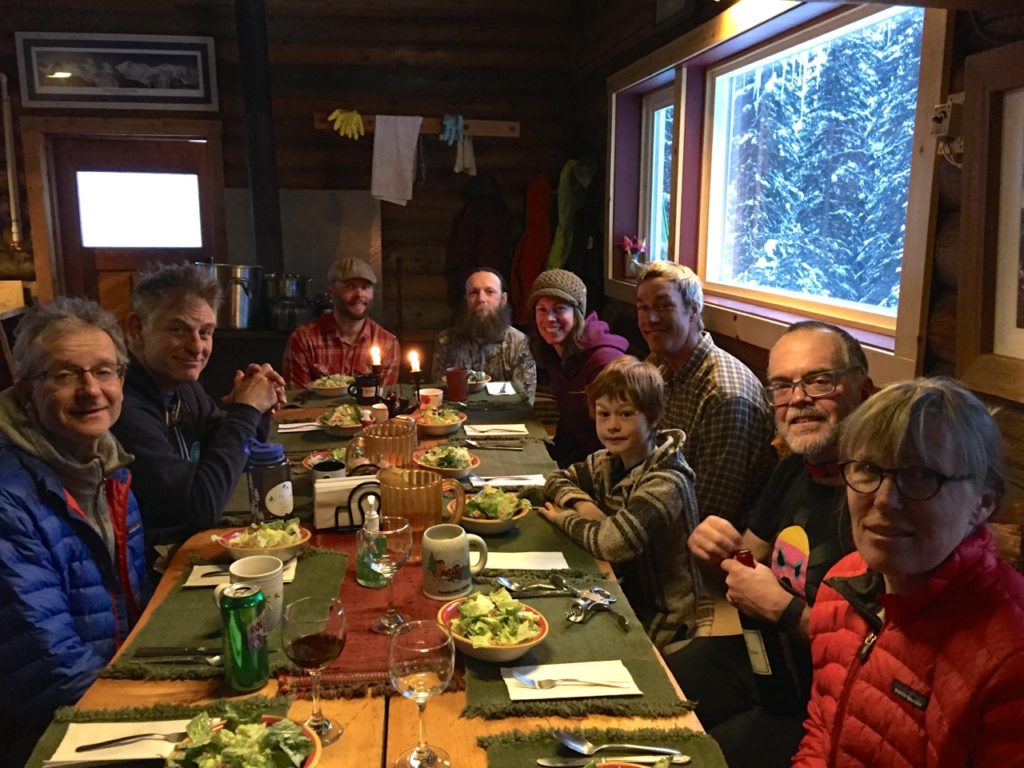 I’m going back to Boulder this winter – and taking along a few buddies – all rookies.  Now if only I can arrange for a reprise of that fit lady with the water bucket.

Check out Gerry’s Blog to read about the rest of my adventures. 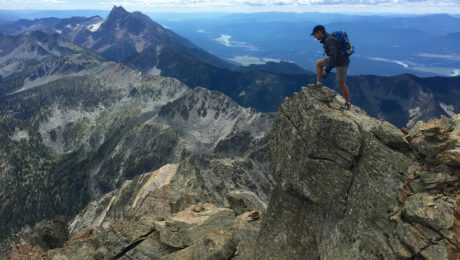 Once in a blue moon something unlikely occurs. A goal beyond expectations – beyond capacity of aging knees – is accomplished.

The view of Fisher Peak from our Kimberley home is mesmerizing. For years I’ve gazed across the Rocky Mountain Trench at that daunting, taunting pinnacle. Fisher dominates the skyline in this range of the Rockies. At nearly 3000 meters it towers over its lofty neighbors.

Last July I watched the second full moon of the month, a blue one, rise near Fisher and said to my brother, “Let’s do it.”

Good weather is critical to mountain climbing. Luckily, the forecast was ideal: clear skies and calm winds. An alpine storm even in summer can necessitate an overnight bivouac. We were not equipped for that nasty contingency.

As predicted a perfect day greeted our early start. Climbing Fisher requires no mountaineering equipment, no technical skills. But it’s a long drive to the 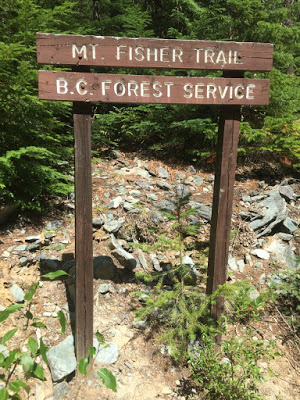 remote trailhead and the sheer, steady steepness of the climb – and the equally grueling descent – make for a long, hard day.

From trailhead to summit the elevation gain is 1400 meters. That’s nearly a vertical mile!

The hike began unfortuitously. When my brother Patrick donned his daypack, the water reservoir was empty – and his pack was sopping wet. A leaky start.

It is imprudent to begin a seven-hour climb on a hot summer day without H2O but we had little option. We’d driven an hour up bumpy logging roads to reach the trailhead. Returning to get water meant we would not have time to complete the ascent. Besides, we were in the mountains. That’s where water comes from. Find a stream, fill up – and beaver fever be damned.

The upward march began in a shaded forest of conifers. After an hour, patches of light started to shine through the canopy and the trail opened across a jumble of rocks. Beneath our feet we heard gurgling, the babbling of an invisible creek. The steepness continued as the path skirted a cascading waterfall, the source of the hidden rumbling – and the source of clean, beautiful liquid sustenance to fill an empty camelback.

After ninety minutes of relentless climbing, the trail leveled and we came upon a beautiful alpine tarn, its crystal clear waters mirroring the jagged peaks enveloping us. Above the small lake a cirque opened up and we had our first view of Fisher, the temptress, still hundreds of meters higher.

A solitary marmot whistled a warning call. The sound echoed loudly off the walls of the rocky amphitheater.

We were halfway to the summit. 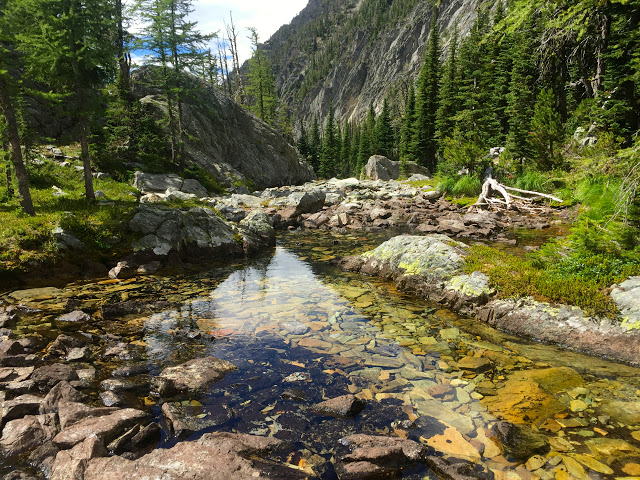 The next leg of the assault is difficult: three hundred vertical meters of steep, loose scree. A real b*#ch!

Even with foreshortened hiking poles digging firm, two hard-earned forward steps were countered by a slippery step backward. The scree section is also dangerous. As it steepens, the risk of lost footing and a fall increases. And, worse still, a hiker above can dislodge rocks upon those below.

Self-preservation dictates that you want to be in the lead. Unfortunately, Pat is fitter, stronger and younger than I. So, lagging behind, my focus was 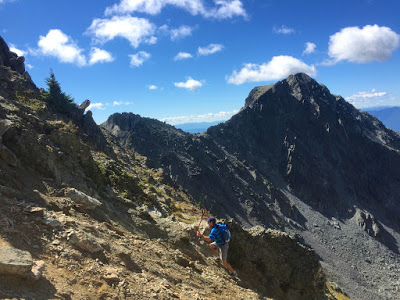 keeping my head up while also keeping it down.

Did I mention the scree was a real b*#ch.

After an hour the loose slope resolves to a saddle – a safe refuge before the final climb to the top.  This notch in the mountain is festooned with prayer flags. We took a breather in the thin air and gazed around. We had equaled the height of the nearby Steeples, where we’d seen the moon rise a few nights before. Dibble Glacier, a remnant of the last ice age is visible from this vantage, its ancient blue-gray mass cupped within the Steeples.

The last section begins innocuously with a well-marked switchback through ever-bigger rocks. But soon these boulders become broken, vertical slabs. We abandoned our hiking poles, which became a liability in the four-limbed scramble up, over and around truck-sized stones.

Clinging precariously to handholds and squeezing through narrow fissures, we neared the top. 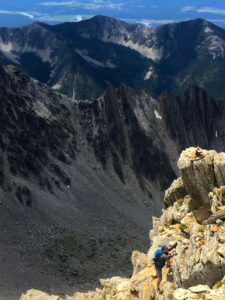 In a few spots only a tiny foothold marked the difference between moving safely upward or making a quick 1000-meter descent. But for us this was the fun part.

The top of Fisher is as tiny as it appears from our balcony 30 kilometers away: a small platform with room for just a handful of climbers. I’m not sure what I expected at the peak but was surprised to see just a jumble of huge boulders stacked atop one another. Like the playthings of a giant.

The view from the top is remarkable. 360 degrees of pure horizon. To the north and east an endless ocean of mountain peaks. To the south the blue meandering waters of the Kootenay River and Koocanusa Lake disappearing into the United States a hazy hundred kilometers away. In the west, directly below us, lay the verdant green fields of the Trench. Further distant the bare ski runs of Northstar Mountain stood out clear as day. I could almost see my deck over there in Kimberley. No, I couldn’t. 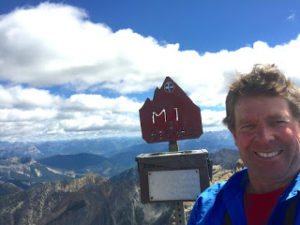 The difficulty with scrambling up to a steep, precarious perch is… what goes up must come down. On the ascent we had concentrated on grabbing, reaching and looking upward. To get down we had to look down. It was disconcerting hanging over a cliff ledge, slipping toward an invisible foothold below.

But we slid safely through the slabs, retrieved our poles at the saddle and surfed down through the scree. Soon we were back at the lovely tarn. We stopped briefly to look back up at the now distant peak. Picas gallivanted about, squeaking cutely, gathering nesting grasses, oblivious to the great feat we had just accomplished. 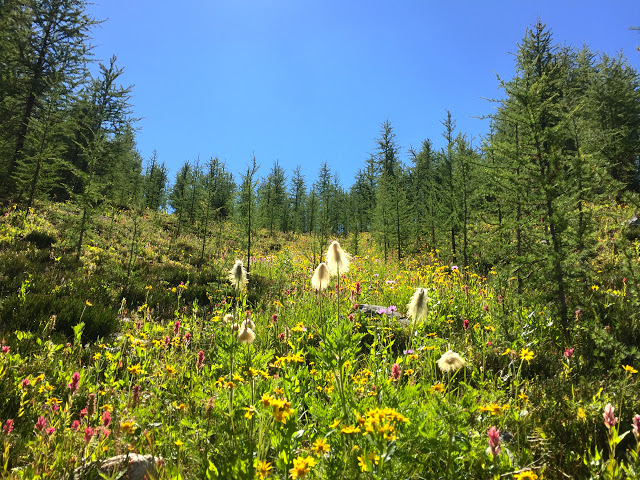 We were back in Kimberley in time to enjoy barbequed steak. At sunset we sipped a cold one on the deck and watched as alpenglow lit Fisher’s face. The next blue moon is January 31, 2018. What to do for an encore? 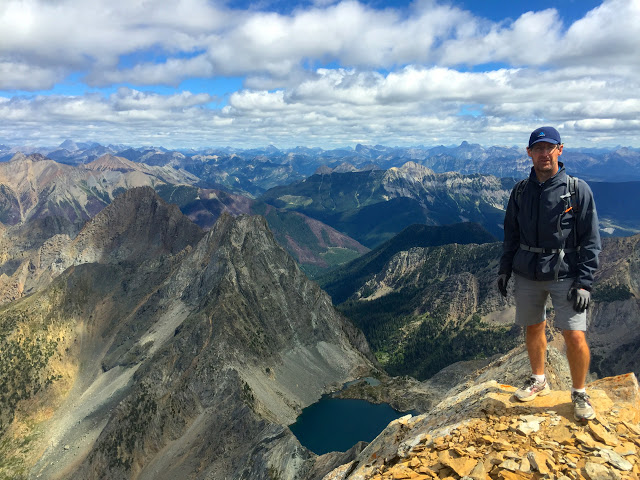 See the original post and more images on Gerry’s blog.